For the first time, America’s Spanish-speaking community, which often finds itself the subject of Constitutional discussion, has the opportunity to join these discussions in their own language.

In a new book titled Cápsulas Informativas Constitucionales, (available at amzn.to/20BqgQr), Spanish speakers can read not only the Declaration of Independence, the Constitution, and the Bill of Rights in their native language but they now can also learn the accurate historical context and contemporary implications.

All of this is accomplished in a simple, unbiased, easy-to-read format taking into account the “sound bite” nature of today’s cyber-driven, fast-click culture.

With information going far beyond the basic civics education provided in preparation for citizenship exams, Cápsulas Informativas Constitucionales will help Spanish language readers understand the history and context of America’s founding documents, identify the freedoms and rights guaranteed to all citizens, and actively participate in the democratic process.

Readers will find in Cápsulas Informativas Constitucionales that the principles of America are not liberal, conservative, Republican or Democrat, but are the heritage that binds people together into a community known as America.

This work represents, in a format that modern media consumers prefer, a long tradition of informing citizens about the country’s founding documents in their native languages. In 1787, fully one third of Pennsylvania’s residents were German speakers. Accordingly, of the 4500 copies of the proposed Constitution that legislature ordered, 1500 were printed in German.

While the dissemination of such information in translation speaks to the ideal of equality, the medium has had to evolve with the preferences of modern Americans. Our forebears may have appreciated poring over reams of long-form essays such as The Federalist Papers. Modern citizens, however, are accustomed to getting information in short bursts and often from entertaining online sources.

Shestokas said, “My grandmother came to the U.S. to escape the horrors of the Communist regime in Lithuania, and her memory serves as my inspiration to teach about the freedoms we all have. Under the Constitution, we are all entitled to the same rights, regardless of ideology and whether our first language is English or something else.”

Throughout her seamless translation for Cápsulas Informativas Constitucionales, Arias takes great care to maintain Shestokas’ voice while faithfully retaining technical and historical accuracy. Arias said, “Working so intimately with this project reminded me over and over again that the words in the founding documents are not simply words. They represent who we are as a people and what we hope for each other. I believe this book will be a great resource to everyone who wants to better understand how the United States works and why it is unique.”

An English language companion edition is due to be released within the month. It mirrors the Spanish work, in which Shestokas provides additional technical and historical details not found in his original series. Both versions contain the full text of the Declaration of Independence, the Constitution of the United States of America, and the Bill of Rights and are appropriate for native Spanish speakers and those who wish to further their Spanish reading skills as a second language.

Berta Arias, Ed.D. is an accomplished Cuban-America woman of many talents and the

winner of numerous awards garnered during an illustrious career as a professor in world languages and international education in the Chicago area. Dr. Arias has made helping others, saving communities and bringing beauty and learning through the arts a cornerstone of her being. She served as the first Board President of the Illinois Latino Council on Higher Education, (ILACHE) where she has funded a scholarship for Excellence in Writing. Dr. Arias offers the winning students her personal time to help them achieve their goals. In her collaboration with Mr. Shestokas on Cápsulas Informativas Constitucionalesshe lends her extensive experience in translation toward those same goals of helping young Latinos succeed in America. Throughout her academic career, Dr. Arias has channeled her creativity by writing poetry and short stories. Now, on her next stage of life, she has moved to Amelia Island, Florida. There, when she is not championing the cause of trees, the environment, libraries and education, she is slavishly attending to her novels. Her first book, Mango Rain, is a luscious story of intrigue, beauty and love that spans Chicago and Havana. Its prequel, Mimi’s Path, is due out spring, 2016.

David J. Shestokas earned his B.A. in Political Science from Bradley University and 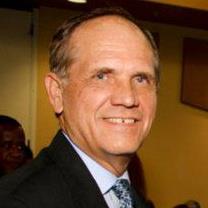 his Juris Doctor from The John Marshall Law School, cum laude, where he served on The John Marshall Law Review. He studied law at Trinity College in Dublin, Ireland. A former Assistant State’s Attorney, he has been admitted to practice law before the Illinois Supreme Court, the United States District Court for the Northern District of Illinois, the Supreme Court of Florida, and the United States District Court for the Middle District of Florida. Mr. Shestokas has hosted his own weekly, broadcast and live-streamed radio program, “Constitutionally Speaking.” Using that as a springboard, he has attracted over 80,000 followers on Twitter. His website Constitutional and Legal Education and News has 30,000 monthly readers. His Facebook, LinkedIn and Google+ social media community exceeds 20,000. An avid writer, Mr. Shestokas has brought the Declaration of Independence, the United States Constitution and the Bill of Rights to life through his published works,“Constitutional Sound Bites.” That work is a three-volume set which comprises the entirety of the single Spanish language version.