Ford’s Garage Restaurant: A First for the Automotive Giant

Ford’s Garage, a prime burger and craft beer restaurant, is pleased to announce it has entered into a brand licensing agreement with the Ford Motor Company. The Fort Myers, Fla.-based restaurant chain is the first in its industry to be issued rights to the iconic blue oval logo and Ford’s brand imagery including archived historical photographs, images of vehicles, and actual Model-Ts.

FG Restaurant Group received the license from Ford Motor Company after a comprehensive review, which demonstrated a high level of confidence in the rapidly expanding restaurant group. Marc Brown, a partner in the original Ford’s Garage, served as liaison between the two entities during the months-long process.

Presently, Ford’s Garage has three locations including the newly redeveloped historic River District of downtown Fort Myers. Located only one mile from the Edison & Ford Winter Estates, this popular spot to meet and dine resides in the historic Dean Building, built in 1923. Additional locations have opened in Estero’s Miromar Outlets as well as Downtown Cape Coral.

The original Fort Myers site, which is reminiscent of a 1920s service station-themed hangout, takes on a Prohibition bootleg bar vibe at night. With its many Ford-inspired design cues and first-rate service, Ford’s Garage promises to continue to inspire additional locations, which are planned for cities along Florida’s Gulf Coast and the Midwest.

Co-Founder Daniel P. Kearns said he was grateful to Ford Motor Company and explained that capitalizing on the Ford brand will allow for greater expansion for the restaurant chain and opportunities to franchise. “Ford Motor Company has always recognized innovation when it sees it,” said Kearns. “Having access to the brand is a major benefit to the restaurant.”

A long-term goal is to open a Ford’s Garage in Southeast Michigan, so the restaurant can pay tribute to Henry Ford’s spirit of innovation in the state that hosts Ford Motor Company’s World Headquarters, The Henry Ford Museum, and Motor City. The establishment will feel right at home with its auto mechanic jumpsuit uniforms for the servers, gas nozzle door pulls, hose clamp napkin holders, glass-paned garage bay doors, vintage fuel pumps and oil barrels, Ford memorabilia, an antique car horn that sounds when something notable happens at the bar, and even actual Model-Ts and Model-As on a lift above the hand-hammered copper bars. Another feature is the ice rail built into the bar surface, so patrons’ brews and cocktails can remain frosty from first sip to last.

“The casual dining industry allows us to bring the brand experience directly to the customer’s table. We are looking forward to expanding the Ford’s Garage establishments around the nation and in our home state,” remarked John Nens, Global Brand Licensing, Ford Motor Company.

In addition to the meticulous consideration paid to décor, guests of Ford’s Garage will attest an equal, if not greater, attention to detail is paid to the food. Burgers are the main draw, with endless combinations of natural aged cheeses, fresh toppings, gourmet sauces, artisan breads, high-quality Certified Black Angus and American Kobe Beef, Free Range Turkey and Chicken, Gulf Seafood, and Vegetarian burgers.

The beer list at Ford’s Garage is carefully mapped out with more than 200 different types of bottled craft beer and 22 drafts, with a heavy influence of American craft beers from all around the country. With an extensive menu of appetizers, salads, comfort foods, gourmet mac and cheese, desserts, full liquor bar and the opportunity to indulge in the  Ultimate Burger Experience with the Build your own Burger Assembly Line, many diners have already discovered this neighborhood burger and beer joint, where everyone is welcome

Co-Founder Mike McGuigan indicated that the relationship between Ford’s Garage and Ford Motor Company is a natural fit. He commented, “Over the course of attaining this agreement, it became clear that both companies share a passion for quality first and foremost.”

Ford’s Garage has proven itself a turnkey operation that will be a popular dining out choice in any neighborhood. Each location takes care to pay homage to its community with its signature Burgers of Fame. On an annual basis, each signature gourmet burger is named after a local community leader or celebrity, with his or her blessing. 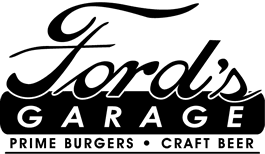 FG Restaurant Group represents a partnership between Daniel P. Kearns and Zak Kearns of Kearns Restaurant Group and Mike McGuigan of McGuigan Restaurant Concepts. They have developed and operate some of the most dynamic restaurant concepts in Southwest Florida, which are poised for expansion, with others set to open soon. Their Established restaurants in the historic River District of downtown Fort Myers include Ford’s Garage, Los Cabos Cantina, The Firestone Grille and Sky Bar, and Capone’s Coal Fired Pizza. Two additional Ford’s Garage locations have opened in downtown Cape Coral and in Estero’s Miromar Outlets. The Boathouse Tiki Bar & Grill was recently unveiled at the Cape Coral Yacht Club. For more information call (239) 337-3673 or visit FordsGarageUSA.com.